This post from 2010 started getting a lot of hits mid November.  I have no idea how it was found or how it got so much traffic, but I went with it and decided to repost it again this year! 🙂

One Family, One Journey. One Child who would change the world forever.

Have you seen the movie: The Nativity Story?

It was so good for me to emotionally go on that journey with Mary & Joseph. It made things very real to me.

I mean, can you imagine how difficult it was for Mary, an unwed teen, to be scoffed by her friends who think she’s nuts, when she says she has never been with a man, but is pregnant anyways? Or how about having to tell her parents the big news: Did she wait until she was showing, or tell them right away?

How about feeling the threat of DEATH by stoning looming over her head, should Joseph choose to file charges against her?! I wonder, since her parents choose Joseph as her betrothed, does she even know him that well at this point?

Does she know enough about him to think he’ll believe her story? How scary to not know what will happen next!

Although Joseph’s initial reaction was to break the engagement, totally acceptable in that day, he treated Mary with such kindness. What a gentleman! He didn’t want to cause her further shame, so he decided to act quietly. I am so glad God chose to send an angel to Joseph in a dream, to verify Mary’s story, that way, he could be reassured that his marriage to her WAS God’s will after all.

When the angel explained that the child within Mary was indeed conceived by the Holy Spirit, that his name would be Jesus and that he was the Messiah, God with us, did he freak out!? Did he sit in wonder and awe? Don’t you think he lay awake the rest of the night, thinking of what his life with Mary was going to be like?

Parents of THE MESSIAH?

That is some heavy thinking for the middle of the night! He willingly took Mary to be his wife, knowing they were being looked down upon in their town. Maybe this noble quality is one of the reasons God chose Joseph to be the earthly father of Jesus.

And later, as they are married and traveling to Bethlehem, I was shocked to see footage of Joseph’s bloody, calloused feet. I had never thought of this before, but why wouldn’t they be? They walked the approximately 60-90 miles to Bethlehem, where the census was taken.

Poor Mary, riding or walking that long journey, big and pregnant. I bet her baby pressed on her bladder, making them stop often, I bet the heat was unbearable at times, I bet nights were spent in discomfort, sleeping on the hard ground.

How about going into labor in a town far away from her mother and all things familiar? A newly married young woman, who had never been intimate with a man, giving birth to her first child, who also just happens to be the Savior of the world!!!!

Do you remember that feeling, as you realized you were about to give birth to your first-born? I mean actually bring them into the world.  Those emotions you felt, as you anticipated, yet dreaded the labor part. Did sweet Mary cry for her momma? Did she squeeze Joseph’s hand as hard as she could as she contracted? Was he a good coach? Did she trust him to help safely deliver this precious child in a stable, or was she afraid even though the angel said, “fear not”? 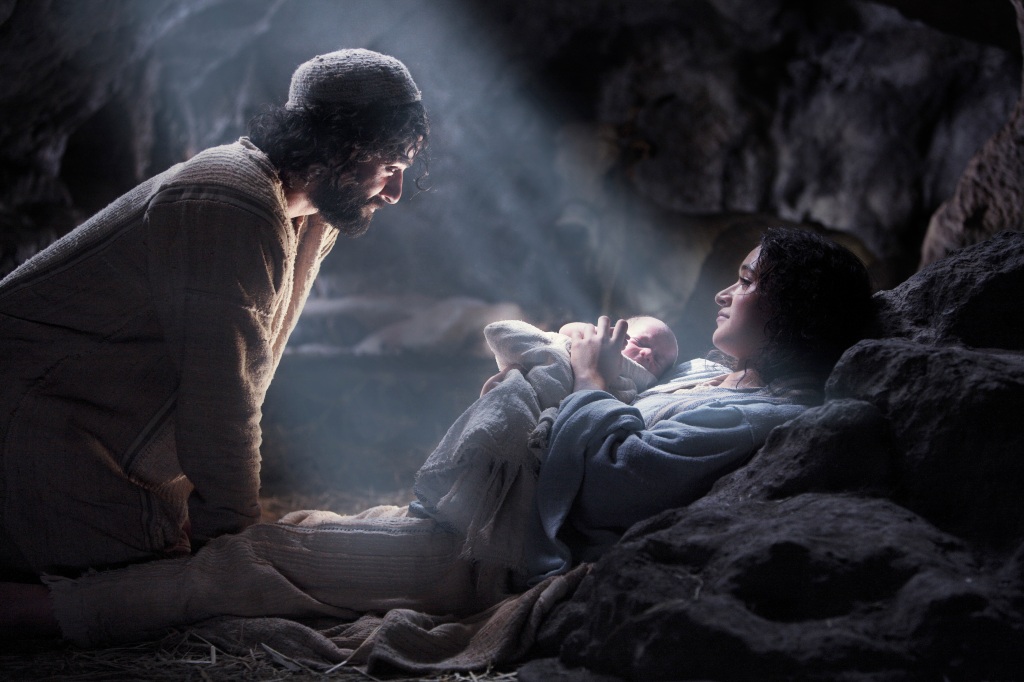 Oh, the joy she must have felt, as she lifted that precious child in her arms, counted his ten tiny fingers and toes, and marveled at all that had just occurred.

How overwhelmed she must have been, as she looked around their humble dwelling, wondering what she had to offer the King of Kings?

Wondering about this babe, who would grow into a toddler full of questions: When would they know, that he knew, He was the King of Kings? A look in his eye? The words from his mouth? Did she wonder what kind of challenges that would create?

And what about when all those stinky Shepherds showed up? Exhausted and emotional, what was she feeling as they came and touched her new baby? You know how protective first time moms are! Did she wish she could have them wash up first?

As the shepherds left, they were still praising and glorifying God, but sweet Mary kept quiet, treasuring their words and pondering them in her heart. Don’t you think at that moment, it must have been beyond her ability to grasp, that sleeping in her arms—the precious child she had just worked so hard to bring into the world—was the Savior of the World. Wow!

How real everything becomes, as you watch in this movie, and see those precious little lives lost, as Herod in fear of the newborn King, commands all the baby boys under the age of 2 to be killed. Oh, the heartache of those mothers, screaming as their baby sons were ripped from their arms and slain, I just wept and wept.  Such mourning happened in those towns in the months to follow, as broken-hearted mothers put back the pieces of their shattered lives.

I have to wonder, as Mary and Joseph were told by the angel to flee in the night to safety, how old was Jesus at the time? A little boy full of questions? Or still a newborn babe?  Did Mary’s pumping adrenaline kick in?  Did those ‘mother bear’ instincts get her through? Or was she paralyzed with fear, and have to be prompted by Joseph to, “Stop crying and pack!” so they could get going? How did she manage? I can’t imagine what she was feeling, still in a foreign land, far from home, now fleeing to Egypt to be refugees there!!  And wait, Mary’s journey isn’t done yet, still later, another dream tells them to return back home, FINALLY!  Who knows how many years later this occurred?! What a STRONG woman!

Watching this movie was eye-opening to say the least!  It is my hope, that this Christmas, you will celebrate the humble beginnings of our Lord and King. and remember, just how real this was to a newlywed couple in Bethlehem, who experienced a life changing, WORLD changing moment…..as they held our Lord and Savior in their arms and kissed his sweet head.

May Jesus be real to you today, as you prepare to celebrate His birth.

Mary Did You Know

The blind will see.
The deaf will hear.
The dead will live again.
The lame will leap.
The dumb will speak
The praises of The Lamb.

8 thoughts on “Mary Did You Know?”